Starting with some well-needed positive news, several countries recently among the world’s hardest-hit by the COVID-19 pandemic are beginning to talk about how and when they might start to reopen their economies.

But renewed containment efforts in countries including Japan and Singapore, which had enjoyed early success in containing the coronavirus through vigorous testing and tracking, remind us that the battle isn’t easily won, and may not be over until a vaccine is developed or broad populations achieve immunity.

Vanguard continues to anticipate the sharpest global recession in recent history, with growth in the United States and Europe contracting in the second quarter at the steepest pace since at least the 1930s. But we continue to anticipate that the global recession will be short, with global growth turning positive in the second half of 2020. That said, we expect the recovery will be “U-shaped” in that it will be at least the end of 2021 before economic activity returns to its pre-COVID-19 level. We expect recovery to proceed in two stages, as we’re beginning to see in China: a bounce-back in growth as supply constraints recede, but a longer wait for demand to strengthen.

Business has resumed in China, with estimates of activity as high as 90% of pre-coronavirus levels, just over two months after the first lockdowns in several cities.

Despite China’s GDP contracting 6.8% in the first quarter in 2020, Vanguard cautions against reading too much into this figure for its global or its domestic implications.

Vanguard expects China’s growth for 2020 will be the lowest in the four decades since it opened its markets. This first quarter drop is the first contraction since 1992 (when Beijing first started releasing its quarterly figures), but that shouldn’t necessarily suggest an ensuing V-shaped recovery (sharp contraction followed immediately by strong growth) because the reopening of China’s economy will coincide with many trading partners’ second-quarter lockdowns. China’s first-quarter GDP numbers also shouldn’t be viewed as a signal for second-quarter GDP data in other countries, given vast differences in economic structures and epidemiology.

Vanguard believes that GDP in the US could contract at a significantly greater degree in the second quarter than it did at the worst point of the global financial crisis, with the extent and timing of recovery dependent on when containment efforts can be rolled back. Even then, it will take time for activity to return to normal as consumers come to terms with their fears about re-engaging with important face-to-face sectors of the economy such as entertainment and hospitality. We believe that the unprecedented response by the US Federal Reserve and Congress will stave off even worse outcomes.

Evidence that the virus outbreak has peaked in Italy, Spain, and Germany is leading to expectations that lockdowns within the euro area will begin to gradually be lifted soon. Vanguard’s view that the economy can start to rebound in the third and fourth quarters as lockdowns are removed is tempered by the risk of a second wave of infection that could necessitate containment measures to be reinstated. The assessment is similar for the United Kingdom, which infection data suggest may be a week behind Europe in virus transmission.

The economy in Australia was vulnerable even before COVID-19, with summer bushfires most likely shaving 0.2% to 0.3% from GDP. The coronavirus outbreak threatens to drag Australia to two consecutive quarters of economic contraction for the first time in nearly 30 years.

The economy in Japan was struggling even before the outbreak. GDP fell at an annualized rate of 7.6% in the fourth quarter of 2019, with imposition of a value-added tax straining an economy already late in the business cycle and with monetary policy stretched seemingly to its limits. Although Vanguard had foreseen recession in 2020 as a risk for Japan at the start of the year, it wasn’t our base case. Now we see an economic contraction for the year as inevitable.

We foresee flat growth at best for Canada in 2020, and modest contraction for Mexico.

The Vanguard Capital Markets Model® forecasts for December (Figure 1) utilised data through 31 December 2019 – little over a quarter ago, yet a time that is feeling increasingly distant.

As in our 2020 Economic and Market Outlook, return projections had continued to be subdued as both equity valuations remained elevated, and outlooks of restrained growth and inflation dampened fixed income.

However, a lot has unfolded since then – in order to frame these projections in the context of recent market events, we have contrasted our December forecast with an interim March outlook. This off-cycle update provides an indicator for the range of annualised returns we might expect, given market movements and volatility.

The median 10-year annualised return for December is shown alongside a range of central expectations for March.

As previously mentioned, more attractive valuations have buoyed our long-term equity return, placing December’s medians at the bottom end of our revised range as stocks are afforded more room to grow. Meanwhile fixed income returns have been further pressured by historically low yields, shifting our expectation for the asset class downwards.

Vanguard’s preliminary March 2020 outlook for equity returns has improved since the start of the year as the COVID-19-inspired sell-off reduced valuations. These 10-year annualised return ranges are shown below and referenced in Figure 1.

Navigating daily uncertainty is everyone’s new normal. We’ve all been thrust into a world where all aspects of our lives are being re-evaluated and re-examined using a new lens. It’s forcing many of us to focus on the things that will keep our eye on the end game.

It is true that this downturn is different. Each downturn has had its own fingerprint, and differing factors driving down market performance. Yet, they’ve all recovered. The good news is that the recovery from this current downturn is predicted to be relatively swift.

Illustrating the effects of Bull and Bear markets on investments for the past forty years. 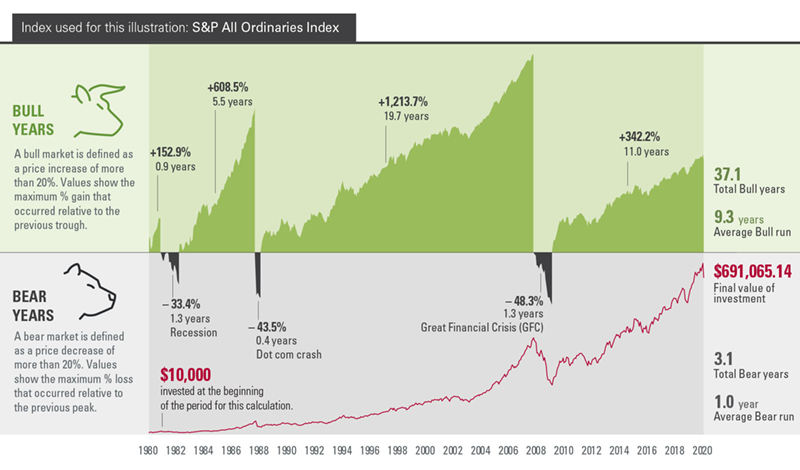 As a behavioural coach, you have an opportunity to help clients separate emotion from strategy, and find some peace-of-mind amidst all the daily uncertainty.

More than ever before, the message to your clients is the need to ‘stay the course’.

IMPORTANT: The projections or other information generated by the Vanguard Capital Markets Model regarding the likelihood of various investment outcomes are hypothetical in nature, do not reflect actual investment results, and are not guarantees of future results. Distribution of return outcomes from the VCMM are derived from 10,000 simulations for each modelled asset class. Simulations are as of 31 December 31 2019 and 31 March 2020. Results from the model may vary with each use and over time.

The VCMM projections are based on a statistical analysis of historical data. Future returns may behave differently from the historical patterns captured in the VCMM. More important, the VCMM may be underestimating extreme negative scenarios unobserved in the historical period on which the model estimation is based.

The Vanguard Capital Markets Model® is a proprietary financial simulation tool developed and maintained by Vanguard’s primary investment research and advice teams. The model forecasts distributions of future returns for a wide array of broad asset classes. Those asset classes include Australian and international equity markets, several maturities of the Australian Treasury and corporate fixed income markets, international fixed income markets, Australian money markets, commodities, and certain alternative investment strategies. The theoretical and empirical foundation for the Vanguard Capital Markets Model is that the returns of various asset classes reflect the compensation investors require for bearing different types of systematic risk (beta). At the core of the model are estimates of the dynamic statistical relationship between risk factors and asset returns, obtained from statistical analysis based on available monthly financial and economic data from as early as 1960. Using a system of estimated equations, the model then applies a Monte Carlo simulation method to project the estimated interrelationships among risk factors and asset classes as well as uncertainty and randomness over time. The model generates a large set of simulated outcomes for each asset class over several time horizons. Forecasts are obtained by computing measures of central tendency in these simulations. Results produced by the tool will vary with each use and over time.

Kofkin Bond & Co is an Authorised Representative of Count Financial Ltd ABN 19 001 974 625 AFSL No. 227232 which is 85% owned by CountPlus Limited ABN 111 26 990 832 (CountPlus) of Level 8, 1 Chifley Square, Sydney 2000 NSW and 15% owned by Count Member Firm Pty Ltd. ACN 633 983 490 of Level 8, 1 Chifley Square, Sydney 2000 NSW. CountPlus is listed on the Australian Stock Exchange. Count Member Firm Pty Ltd is owned by Count Member Firm DT Pty Ltd ACN 633 956 073 which holds the assets under a discretionary trust for certain beneficiaries including potentially some corporate authorised representatives of Count Financial Ltd. The information on this web page is not advice and is intended to provide general information only. It does not take into account your individual needs, objectives or personal circumstances.